THE SOVEREIGN GODDESS OF AVALON IMAGE

THE SOVEREIGN GODDESS OF AVALON IMAGE 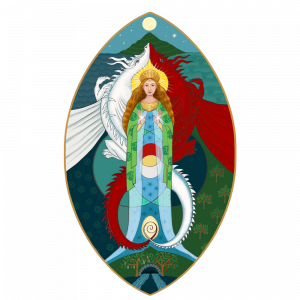 This image of the 2022 Sovereign Goddess of Avalon Conference has been created by Goddess artist extraordinaire Wendy Andrew (www.paintingdreams.co.uk). Wendy had of course also designed the big five main altar banners of which four have been celebrated already (Moon Maiden, Sun Lover, Earth Mother and Star Queen). It felt so appropriate and exciting to ask her to design the ‘sixth’ Bridge-Year image, which she kindly did!

This year we focus on grounding and centring us in Goddess, in Avalon and in our inner Sovereignty. Wendy has expressed this magically in the image. This image has so many layers, the longer your look, the more you discover. Please allow us to ‘lift out’ some of the elements of her painting:

Sovereign Goddess of Avalon
You who radiate magic and mystery
and dance in unity with the primordial Dragons
as they twist and turn
their pathways in the land.
We welcome Your presence
and call you by Your ancient names
Brighid, Don, Elaine, Epona, Kundry
Morgan, Nemetona, Nimue, Rosmerta,
the many and the one.

Sovereign Goddess of Avalon
You who radiate the light of sun and moon
and flow in unity with the sacred waters
as they emerge and mingle
their pathways through the land.
We feel Your presence
and call to Your elemental forms
Earth, Air, Fire, Water and the
Ethereal Veils of Mists
binding us as one

Sovereign Goddess of Avalon
You who radiate the energy of this sacred Isle
and dance in unity within our community
as we seek and explore
our pathways in connection with the land.
We honour Your presence
and call to You in ceremony and celebration
on the Tor, in the Apple Orchards, on the Levels,
at the Egg stone, around the vesica Pisces,
gathering as one.