The Crone of the Hollow Hills

The Crone of the Hollow Hills

As the Wheel turns we circle and dream in the 2023 Goddess Conference which will honour the Crone, Lady of the Otherworld.

It seems fitting to start this sequence of blog posts with the Crone of the Hollow Hills. As I write this it is the traditional time of the Crone – Samhain, the midpoint between Equinox and Solstice. The Veils are thin, the Otherworld whispering around me. She is everywhere – in the newly bared branches of the trees outside, in the chill misty air that touches my skin in the morning, in the pull to stillness that I feel within me.

Yet we are honouring the Wheel of the Crone this year. Connecting to Her all through the Year. Journeying to meet Her through every season, through different portals. We spiral down, a circle of sisters, meeting Her and looking upon Her different faces, hearing Her different messages and being gifted different lessons to learn.

This year I am connecting with Her via the Otherworld Portal of the Hollow Hills.

The Hollow Hills appear in Celtic mythology in a number of different guises. They are fairy mounds, the Grail Castle, Gateways into the Earth. They are the resting places of the Ancestors – for most of them are actually burial chambers – created to hold the honoured dead.

Others are natural hills thought to contain a magical space within them – a portal to the Otherworld realm or a chamber deep beneath the surface. I have felt that magical moment when walking on the land, an inner knowing that the ground beneath my feet is no longer solid. I have sensed the deep hollow beneath my feet that is a place of magic, mystery and treasure. I have felt this most strongly in the landscape of West Cornwall, upon Dartmoor and of course Glastonbury Tor – the ground almost echoing beneath each soft step. In these places the magic is still there for those open to feel for it – the portal to the Otherworld not closed, simply hidden within the earth. The Crone of the Otherworld there to whisper guidance and messages to you if you rest, honour Her and open your heart.

In Irish Mythology the Hollow Hills were the home to several Gods and Goddesses and were known as Sidhe (pronounced shee). You may know them best for one of their inhabitants – the Bean-Sidhe. Bean-Sidhe translates as “Woman of the Hollow Hill”. Known now as the Banshee, an Otherworldly spirit whose cry foretells the death of a family member. I believe She was much more complex character in the times of the Ancestors. It is possible that She was originally a Genius Loci – a protective Spirit of Place. She may even have been a Goddess whose name was known only to those who lived nearby to Her sidhe. This Otherworld Woman who lived within the Hollow Hill may well have been honoured via seasonal ceremony and Ancestor worship. It is likely She would have been linked to the tribe who lived nearby, to the bloodline whose bones lay within the Hollow Hill. She may have been an Initiatrix. To meet Her, and work with Her, would have been to die to one’s old life and be reborn in Her service. Her keening can still teach us many lessons about grief, release and honouring our Sacred Truth. To me, the Bean-Sidhe is one face of the Hollow Hills Crone.

In searching for the Crone of the Hollow Hills in the land where I live, it is to the Burial Chambers that I was most strongly called. I have visited several with plans to visit more. If you are keen to meet Her I would encourage you to do the same.

The chambers found throughout the landscape are still complex and impressive structures. They rise up, protruding like a pregnant belly on the landscape, holding the memories of the Ancestors and their secrets within their stones.

Burial chambers are places to visit in order to deepen your connection with the Ancestors, as well as to journey to meet with the Goddess. There are still a number of burial chambers within the UK that have functional passageways into which we can walk or crawl in order to enter the Womb-Tomb of the Ancient Earth Mother. To go within the Hollow Hill is to make that transitional journey, for a temporary period, into the Otherworld. A journey into a liminal place to meet with the Goddess or the Ancestors. A Seeker can be reborn from within the womb-tomb of the Goddess – experiencing transformatory shifts and crawling from the darkness of Her womb out into the light.

Some of my most profound experiences within a burial chamber have been at West Kennet Long Barrow in Avebury. Excavations in the past have discovered that the burials were placed to the sides of the chambers. The presence of ritual objects also within the chambers suggest that the Long Barrow was a place of burial but also of initiation and ceremony. It suggests a place of Ancestral shamanic ceremonies to commune with the Ancestors, to Journey to the Otherworld, to meet with the Goddess. Within the darkness of the chambers I have heard Her whispers. I have felt Her presence and known that She is with me.

To me, at this time, near the start of my journey with Her. She is nameless and faceless. She is strong and cold. She is ageless and ancient. She is Bone Woman. Stone Woman. She is the Dark Ancient Mother within the Earth who holds me as I weep. She calls me to Her, to surrender into the dark places. She invites me to descend through Her portal and to dissolve. She invites me to release what I have held on to for far too long. She asks me to grieve, to keen, to honour and give voice to my Sacred Truth. She transforms me and holds me within Her dark embrace. I surrender to Her, knowing that the rebirth will come in time, knowing that this Journey is only just beginning. This spiral dance I tred with Her is just one cycle of many but it promises a great Becoming.

Blessings to you all 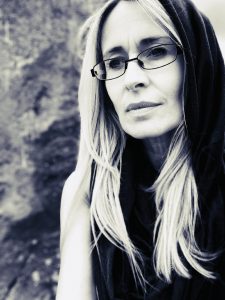