Stepping into the temple of the Star Queen Goddesses. 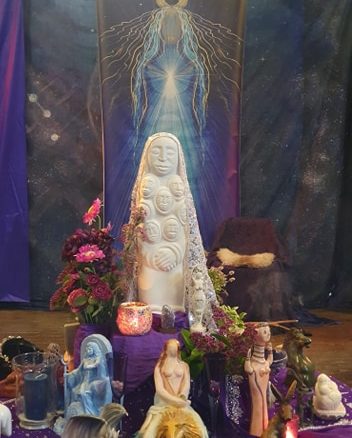 Stepping into the temple of the Star Queen Goddesses.

At the beginning of this beautiful month of May the ceremonialist team of the Goddess Conference, along with some wonderful camera women, film technicians, and assistants, met to create the online opening ceremony for this years’, fast approaching, Goddess Conference. It was joyful to be in the same space after so many months of being apart and working online and over video calls to create something truly beautiful, and now that we were together everyone could create the physical manifestation of the beauty. 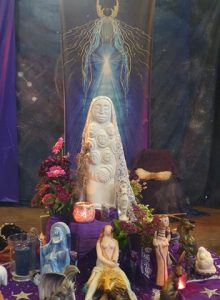 Before any filming could be done the temple space needed to be created. As is common practice for the Goddess Conference, this involved turning a large space into something luscious, beautiful and unrecognisable to what it had been before. I don’t want to give away all of the secrets of what made this transformation possible but let me just say that it involved swathes of vibrant fabric, spools of wire, ladders, tape, and many willing hands. Each person helping was doing so as an act of service to the Star Queen Goddess architypes and the beauty and wisdom that they bring and hold. The morning was filled with laughter and coffee but it was also a sacred moment, a time to come together and connect to the Star Queen Goddesses that we will be working with during this year’s Goddess Conference. 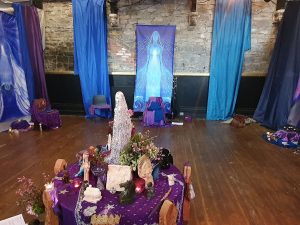 Alters were created with sacred objects, love, and reverence. Thrones were built, transforming ordinary chairs into something regal. Flowers from the sacred landscape of Avalon filled the space with sweet scent and the springtime energy of the land. Each ceremonialist created their sacred space as an offering to the architype Goddess that they were holding. 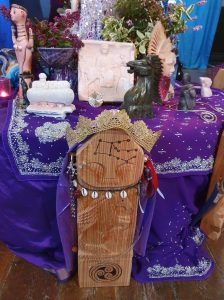 Statues, and objects of sovereignty were positioned in this sacred space. As the space was transformed into a temple the levity and raucous busyness of the morning was replaced with a sweet reverence and joy at being in sacred space together in the flesh again.

The ceremonialist team sat in circle together after months of planning this moment from various locations and various stages of lockdown, they could finally begin to create what all of those months had been leading towards.
The filming commenced and the energy of the newly created temple space was one of star-bright sovereignty, of power and clarity and grace. They were filming all of the rest of the day, and the air only grew more laden with magic. 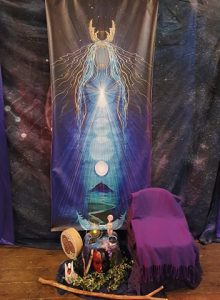 To finish that first day of creation there was wine and chips and laughter and it was so reminiscent of the energy of the Goddess Conference after ceremony, when everyone would sit together in joy and go through the events of the day.

The next day was also filled with filming and acts of service to create the stunning ceremonies for this years’ online version of the Goddess Conference.

To get your tickets for both the online and in person event, click here. The Goddess Conference will be a fantastic opportunity for us to all sit in sacred circle together, in honour of the Star Queen Goddesses.