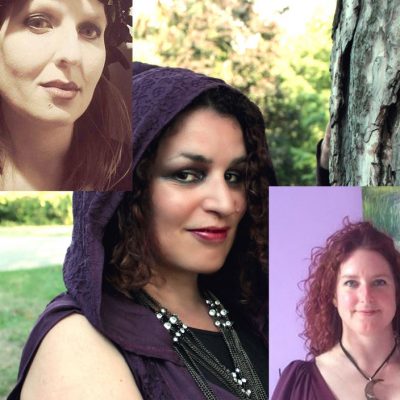 Anneli Lähdetär is a Finnish-American musician and ceremonial practitioner now living in the United Kingdom, who loves sharing the power, magic, and sacred potential of music and sound.  She has performed several different types of music that she brings into her ceremony and performance, including classical piano, madrigals, large scale choral music, Bulgarian and Slavic folk music, and touring the United States as a singer with indie rock band Dirty Projectors.  Anneli now writes devotional music for Goddess, drawing from these experiences and the fantastic folk traditions of the United Kingdom.  She offers several different instruments as part of this work, including an ethereal Finnish plucked zither called a kantele. As a child, Kia Kotsanis dreamed of being a doctor or a fairy sorceress. More than twenty-

one essence. As a priestess-healer, Kia has been honoured to support individuals and

groups as they awaken to the Divine Feminine, and create sacred alchemy in their lives.

Kia is an avid traveller between the worlds, and is collecting frequent flyer points from her

journeys to the Otherworld. Tressy is a Priestess of Avalon who has been active at the Goddess Conference since 2009, as Melissa, participant, workshop holder, and circle priestess.

She is passionate about carrying Avalon and Goddess out into the mainstream world. She does this by running Goddess groups and workshops and volunteering at a Rape Crisis centre.

She loves dreaming as a sacred activity, exploring that magical state between meditation and dreaming in which all boundaries fall away and deep truths are revealed.