Lepus, the Hare constellation of Andraste: She who voices Her guiding courage

Lepus, the Hare constellation of Andraste: She who voices Her guiding courage

She is the Star Hare, messenger of, and bridge linking the different realms.

She calls our courage to face the journey of initiation, the unavoidable journey through the otherworld, in which She will guide us.

Ever since we as humans have gazed up to the stars, we have tried to find meaning, to give form to these guiding ancestor lights in the night sky. Constellations are group of stars visible from Earth with the naked eye, that form a perceived outline or pattern, typically representing an animal, or mythological person or creature, associated with the wisdom stories that guide different cultures and tribes of different lands.

She is the Star Hare, messenger of, and bridge linking the different realms.

She calls our courage to face the journey of initiation, the unavoidable journey through the ‘under’ or ‘other’ –world, in which She will guide us.

To look upon this small constellation between Canis Major (the dog) and Orion (the hunter), is inspiring. Drawn by her agile light, these hunters always pursue, or follow, the Star Hare of Andraste, highlighting Her ability to elude destruction. Never able to catch Her, perhaps the better interpretation is that She is leading them on the great Hero’s journey of initiation, rejuvenation and rebirth.

Our Celtic Tribal ancestors knew the hare as sacred star animal on earth, being able to travel between the worlds and into Otherworld (the parallel universe of the ‘Aoi Si’ of the Irish), where the veils are thin. Through mists, hills, lakes, mounds, caves, burial sites or wetlands, hares were messengers and powerful Tribal totems.

In Cornish folklore, the White Hare is still revered as spirit sign of foreboding. In Celtic Cornwall She brought warning of tempest and coming storm when weaving between the fishing huts in Her lightening white form.

Unlike in Christian folklore, where sighting the hare was a bad luck omen, the pagan Celtic people saw Her as not just a sign of foreboding, but of good luck.

She was the bringer of renewal, rejuvenation and rebirth and gave protection against overwhelming powers, often in the form of the gift of courage.

The Egyptians shared this belief with the Celts and honoured hares as the Goddess Wenet, who was the essence of life and gave the gift of revitilisation through the journey into and through the otherworld also.

Admired for their strength, vigilance, wit, speed and fertility by all Celtic people, as fastest land animal in Britain that is also able to swim, the hare was ascribed supernatural powers of shape shifting. Hares were seen as women who shape shifted and travelled between the worlds, as shamanic power animals or as Goddess personified. So powerful was this star inspired understanding that, amongst all Celtic tribes, the hunting or eating of hare was forbidden, as reported by Julius Caesar in his writing on Britain.

The Romans themselves thought hares to be hermaphrodites, as in self fertile, for their incredible ability to birth life continuously, and therefore associated them with Venus/Aphrodite who Herself had hermaphrodite forms.

For Chinese, Buddhist, Celtic, Yoruba and Egyptian people, the hare was a lunar animal, and as a nighttime feeder, often associated with a local Moon Goddess. The white hare of the Moon Goddess was especially sacred as messenger and bringer of change. Bringing courage to face the initiation thresholds that mark a human life, or the battles we all must fight to face injustice, oppression and inner conditioning. But the sacred hare also initiated the shifts in the seasons, as we can hear in folk songs such as the ‘White Hare’, sung by Yvette Staelens during the Goddess Conference.

The Triple aspect of the Moon Goddess, Her three Hares, symbolises the three main faces of the moon (full, dark and the in between), and hold the full natural cycle of life, death and rebirth in balance.

In Christianity, traces of this Goddess wisdom are found in the association of Mary with the three, or triple, hare. You can see this symbolism in medieval church decorations such as in Cothele in Cornwall, Sampford Courtenay in Devon, Long Melford in Suffolk, and the Lady Chapel of St David cathedral, Pembrokeshire.

Goddess Andraste also has this triple aspect; Her Celtic mythology names Her as Goddess of love, fertility and victory. Like many a Lunar Goddess, this marks Her as Goddess of the full life cycle. There is not much known about the Celtic Goddess Andraste, most famously invoked and adored by Boudica of the Iceni Tribe, while fighting the Roman invasion. Hares were sacred to Her and perhaps Andraste is indeed the name of a Celtic Hare Goddess.

There is linguistic evidence for this link. The Celtic Hare Goddess found in Britain from the Iron Age to late Roman period, particularly in the South and East of England, who later evolves into the better known Anglo-Saxon Goddess Eostra. Both are related to the European Goddess Austro, and the Proto-Indo-European Ausos. Associated with the dawn, as bringer of the light, as holders of the threshold between the worlds, this Goddess was daughter of heaven.

Andraste, bringer of victory, of the light that returns after the night, guides our awareness to a Tribal, inclusive, sacred way of thinking that we have lost. Ways of determination and trust, to voice our courage and inspire others to make a stand for co-operation, inclusion and generosity.

In the night heavens, Her sacred hare self stands as the constellation of Lepus.

She leaps into our consciousness as harbinger Hare of the changes we all must face. Lepus: invincible, uncatchable, embracing the journey though the otherworld and returning each night, victorious, rejuvenated and renewed.

Constellation of Andraste Star Queen Goddess, She asks us to trust our soul journey, to connect to our star seed energy. She opens the possibility to step into our power and guides us to voice our courage with wisdom and kindness. 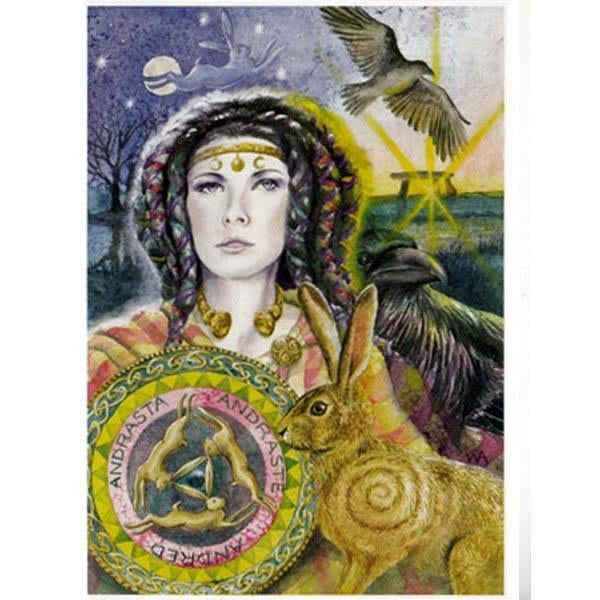