Dahud-Ahes (or Dahut) is one of the Celtic Goddesses whose power and teachings are revealed through her story.

Dahud translates to ‘good witch’, and Ahès to ‘key holder’.

She belongs to the wild land and seascape where the waves meet the shore at the tip of the peninsula of French Brittany. 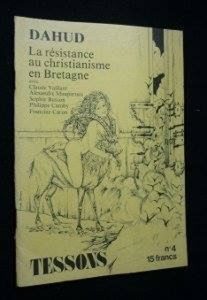 It must be mentioned that there is no written evidence of Dahud-Ahes ever being a pagan goddess, but this is probably due in most part to the fact that the Celts did not record history in written form. Christians did, so what remains now is mostly their version of the story. But as we will see, many aspects of the myth reveal a lot of Goddess-like attributes in Dahud. Moreover, the Christian missionaries fought Dahud with such force that it could only be because She was a threat to their new patriarchal religion – as a Pagan Goddess worshipped by the local people would be.

The legend starts with the King Gradlon of Cornwall falling in love with a bansidh, a woman of the fairy-mounds, called Malgven. Together they had a daughter named Dahud, who was born at sea. She was raised in the ways of the Goddess by her mother before Malgven died, or mysteriously returned to the Otherworld.

Dahud is a child of Earth and Sea, represented by her Earthly father and Otherwordly mother. This existence at the edge of two worlds will re-appear often throughout her myth. Through this, Dahud teaches us to live firmly rooted in our bodies, in the Earth, as well as caring for our soul journey and spiritual origins. She teaches us Balance.

This also makes her the ideal Breton Deity: Brittany being a peninsula surrounded by the Sea, its people were mostly seafarers. They lived a life between land and water, as their Goddess did. 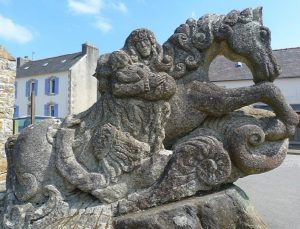 At the time the legend plays out, Christian monks had already converted most of France to their new patriarchal religion, and covered the continent with churches and monasteries.

Again, Dahud was born “in between”: Child of a bansidh (Celtic faery being) and a Christian Father.

The Celtic tradition being mostly matriarchal, Dahud inherited the Pagan ways of her mother and always fought to keep them alive.

As it was getting increasingly difficult to practise the ancient ways in Brittany, Dahud asked her father to build a city where she could reign and live as she pleased.

The king, very fond of his daughter since the loss of his wife, executed his daughter’s wish.

The city was named Ker-Ys (“Ker” = City and “Ys” = Below in Breton). It was founded on the magical, liminal space between the Earth and the Sea, to which Dahud belonged, one foot in each world.

It was so close to the Ocean, almost merging with it, that it had to be surrounded by a giant wall to protect it from the waves.

The reason for the name “The City Below” comes mainly from what will turn out to be the fate of the City at the end of the tale, but some stories say that the city was actually built below sea level.

Ker-Ys became a city of abundance, pleasure, and celebration. Every day was a feast. Dahud was having the best of every continent brought to her city: Food, Jewels, Textiles, Musicians.

The wilder she got, the angrier the Christian monks grew. They accused her of worshipping the Devil and tried to convince her Father the King that the princess should be removed, or God would punish them all.

This is a classic metaphor for conversion to Christianity, trying to convince the King to let go of the old Pagan ways and embrace the new ones, making Dahud the ancient Goddess.

In some versions of the tale, Dahud is said to be the friend or consort of Cernunnos, the Wild Horned God. Together, they represent the ancient Deities of the land, the sacred marriage of Masculine and Feminine. In Brittany, Dahud is still celebrated to this day on May 1st, which is the festival of Beltane, celebrating fertility and sacred union.

One aspect of Dahud’s complex myth which is worth looking into, is her role as a Goddess and/or Priestess of Love and Sexuality.

Dahud was known to freely take a different lover daily. But the story takes a dark turn, as the most powerful myths do.

Every day, Dahud would choose a man and hand him a magical blindfold. She would ask the man to come and meet her in her room, wearing the blindfold. The night would pass, sexual rites taking place under the cover of darkness, and as the sun rose, the magical blindfold would strangle the sleeping stranger to Death.

Dahud’s magical beings, the Korrigans, would carry the corpse to the nearest cliff and throw it into the Ocean.

On the Breton coast, you can still find a place called the “Baie des Trepassés” (Bay of the Dead), which some people speculate is where the corpses were thrown.

We know that those Dark Celtic myths are metaphors for much more mysterious teachings. Dahud was certainly a very sexual being, hated by the Church for that reason. She was the embodiment of Sexuality and wild abandon.

I interpret the death of her lovers as the death of their ego, the death of the men they were before they met the Goddess of Love. Being given the magical blindfold was the sign of having been chosen by the Goddess. Spending the night with her was the Initiation. Death, in its metaphorical sense, was their surrender and transformation. Dahud was one of the last embodiments of this Divine Feminine power in a changing world – the last Sacred Sexual Priestess, as well as the Royal descendant of the land.

Dahud’s own initiation happens when the Devil (We can clearly see the influence of the Church here, but it is a powerful story nonetheless) enters Dahud’s walled city. He seduces her, asks to meet her at night, and requests that she bring the key to the city gates, hung around her father’s neck.

At this moment, Dahud is no longer portrayed as a powerful Pagan Goddess anymore. Dahud is a woman, as human as any of us. Her youth comes through, her immaturity, her disconnection to her deeper instincts. Regardless of age or class, what woman has never been fooled by a con-man, a seductor?

Dahud’s double nature reminds us of our own: Powerful spiritual being, Sovereign of herself, but also painfully human, and prone to making mistakes.

It is an interesting detail in the story that Dahud is not actually the one carrying the keys of the City. She never is, in any version. The keys represent the Sovereignty over the land, over the city that she rules, and yet the keys are in the possession of her father. My personal interpretation is that her father represents her Inner Masculine, her own inner guardian. He is the healthy masculine manifestation of Dahud, and he is protecting her for her own sake.

This is where Dahud’s initiation is triggered, as she chooses to steal the keys from her father while he is asleep, and to give them to the Devil, disguised as a seductive stranger. She puts her own healthy masculine to sleep, and gives her power away to the trickster.

To the Church, this is the ultimate proof of Dahud’s failure as Sovereign – both as an Earthly leader to her people, and as a Goddess being worshipped. Dahud has sealed her fate.

On the human psychological level, this is a very easy mistake for a woman to make. Most of us will go through this initiation in our life.

This is what makes Dahud such a powerful Goddess for women to connect to at this time. As confident as we may be, our egos and weaknesses can catch up with us, and we can turn to Her to find the inner strength to ride the storm and rise again, despite our failures.

You may have noticed that Dahud is never referred to as “Queen”. This is to respect the original sources of the myth. Never in any written record is Dahud called a Queen, but always a Princess. This is probably for the simple reason that her father was still the ruling King, therefore she couldn’t be a Queen until the power was passed on.

King Gradlon is a strong figure in Breton history, not just as Dahud’s father. His statue still stands at the very top of the Quimper Cathedral, suggesting that he was a semi-legendary King (5th century).

Despite her not being an official Queen, Dahud certainly was a ruler and a sovereign to her people. But she did have a certain immaturity to how she reigned (Especially spending way more money than she actually had, and accumulating a lot of material luxuries), therefore earning her only the title of “Princess”. Perhaps Her mythology gives us a great insight in what it takes to be ‘queens of ourselves’, to embody the healthy queen archetype in world today as women standing in our authentic power.

The tale ends with Dahud’s punishment for her naivete, which will also lead to her transformation: The Devil takes hold of the keys, opens the gates of the city, and lets the wild ocean engulf Ys.

As the whole city is sinking, King Gradlon rides the waves on his late wife’s magical seahorse, Morvarc’h. He gets Dahud to ride with him, trying to save both of them, but the weight pulls the horse down. Saint Guenolé, the monk representing the Church in this legend, presses the King to let his daughter drown with the city, as she is the cause for its demise. With a heavy heart, the King lets go of his daughter’s hand. The Church has won, and the Ruler of the land has let the Ancient Goddess sink into oblivion. Alongside Dahud, the Old world disappears. 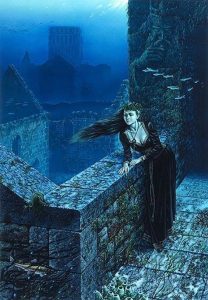 But the ultimate teaching of Dahud’s myth is yet to come.

In the end, all threads are gathered back together.

Dahud – as the Ancient Goddess, with her Wild ways and full Sovereign power – does drown, and therefore reintegrates the Otherworld of her mother. She returns to the mysterious Underworld from which she came, and to which she was always destined.

There, she transforms into a Marie-Morgane – a Breton mermaid or underworld feminine being. In her imagery post-drowning, she is often represented with the Key around her neck, as if the journey – as painful as it may be – had allowed her to take her power back. In the underworld – the soul world – she can finally become Queen.

The legend says that Dahud and Ys never died, but only returned to the Underworld temporarily, waiting for the time when the Earthly world would be ready to welcome the Goddess again.

When someone on the shores of Brittany hears the bells of Ys ringing from below the sea, Ys – and the Goddess – will rise again from the depth…

As for women, our mistakes can lead to our demise, or we can choose to embrace Dahud’s wisdom, and let ourselves be transformed through our journey in the Underworld, meeting the depth of our souls, and rise again with more strength and maturity than we had prior to the lesson.

Dahud’s teachings are plenty: May they be freeing and empowering such as the rights to worship, make love and celebrate, or may they be a fearless shadow-hunting, calling us out on our immaturity and mistakes.

Either way, Dahud embodies the wholeness of what being a woman means, with absolute self-knowledge, strength and the determination to hold our ground in the face of adversity.

by Julie Collet, priestess of Dahud.