Ursa Minor, the constellation of Brittany Goddess Dahud-Ahès, Star Queen Goddess of mastering intention!
Ever since we as humans have gazed up to the stars, we have tried to find meaning, to give form to these guiding ancestor lights in the night sky. Constellations are group of stars visible from Earth with the naked eye, that form a perceived outline or pattern, typically representing an animal or mythological person or creature, associated with the wisdom stories that guide different cultures and tribes of different lands.
The Goddess Dahut (or Dahud), also called Ahès, is a Celtic Sovereign Goddess. Her mythology survives in several Breton legends, where she is portrayed as a magician and a princess of Cornouaille (Brittany), born of the Great Queen of the North, possibly a Goddess of land and sea. According to one such story, the city of Carhaix was founded by Dahut, a reference to a supposed Breton language etymology “Ker Ahès” (city of Ahès), and She was queen there, and held the keys of sovereignty. 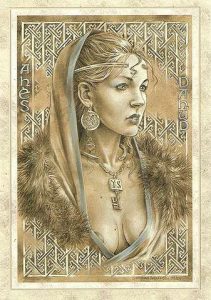 Ahès is said to have created roads, in Brittany called “Hent Ahes”; the pathways of Ahès, now thought to refer to the Roman roads. For the Celts of Brittany, who called the Milky Way “Chemin d’Ahès” (Ahes’ road), star-roads in the sky and connecting trackways of the land, were sacred to Ahès. There may well have been a link to a much older correlation of Dahud Ahès’ as Star Queen Goddess; ’She who guides the way home’, with her star light chariot as “char d’Ahés”: Dahud Ahès’ chariot, which is what the Celts named the constellation of Ursa Minor.
The Chariot of Ahès, Ursa minor, one of the 48 ancient constellations of Ptolemy (2.CE) and among the 88 modern ones recognised worldwide today, is visible all year long from the whole of the northern hemisphere. It’s neighbouring constellation is Draco, the Great Dragon of Brigantia, which winds around char d’ahès.

Ursa Minor was called “MULMAR.GÍD.DA.AN.NA”: the “chariot of paradise” in Babylon 1000 BCE, and was associated with the Goddess Damkina, the ancient Sumerian Mother Goddess of the mountains, and one of the seven great deities of Sumer. She was a great life giving fertility Goddess, a Starry Queen Goddess, like Dahud Ahès’, who temple hymn sources identify as the “true and great Lady of heaven”.
The origin of the constellation’s she-bear name is probably Greek: Strabo in 1st century BCE calls char d’ahès “Phoenician she-bear”. Ursa Minor has since for many pagans become the little bear cub of the sea: the protected, loved child of the Goddess, Lady of the heavens who guides the way home.
In antiquity the whole constellation was considered a pointer towards the North. Dahud-Ahès’ chariot, riding the starry sky roads, was vital to navigating the waves of the sea. As Goddess of both the land above and below the waters, She guided Her people with Her steadfast star presence.
Polaris, the modern name for the brightest star of the constellation, is in fact the current North Star, holding the centre of our night sky. Containing the star that never moves, Dahud Ahes’ chariot is (from our Earthly perspective) the still point around which the universe turns. Equally, Dahud Ahès as Sovereign Goddess was the home Her tribes belonged to.
Dahud Ahès was particularly worshipped in Finistère by the Celtic Osismi tribe. Although the Veneti were said to be the first among the seafaring iron age Celtic tribes of Brittany, all the tribes of Brittany were said to be master seafarers on the ocean. Guided by their Star Goddess, they mastered the intention of reaching their goal, finding their way out, and returning back to the safe haven of belonging. 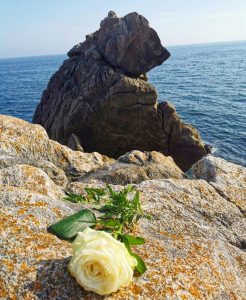 She was at the centre, the still eye of any and all metaphorical storms, and the life of Her tribes moved around Her. Uncompromising and protective of Her realm, Dahud Ahès holds safe the magical intention of following the soul journey, of knowing and trusting intuition, through making the heart your true home. By being guided by their Tribal Star Queen Goddess as their point of reference, Her people could never get lost. Furthermore, as Dahud held the keys of Her realm for Her people, the protection of the Goddess was upon them when they dwelled within Her domain. 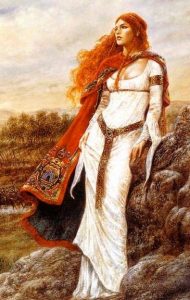 Finally, as Star Queen Goddess, Dahud teaches us today about the sharing of power and responsibility, of how to be the centre and of how to move to the side to let another shine, through the wisdom of Her constellation.
3000 years ago the true North held by the North Star was a star in the constellation Draco. In 4000 years it will be a star in the constellation Cepheus. Thus the Tribal Star Queen Goddesses are showing us the cyclic sharing of responsibility and power amongst a circle of equal Star Queens Sisters.
Dahud Ahes is Star Queen of the North in this time, now. Bringing the gift of mastering intention, She will demonstrate how, as Star Queen Goddess, to hand over this role to the next sister when Her term has ended, with grace, without drama, battle or competition.
Long may She ride in Her chariot amongst the Stars showing us the way.
by Katinka Soetens for The Goddess Conference
Art by Christophe Babonneau and Luis Rojo, photo by IG user @corentindaveau