Why an honouring of our belonging, in relationship to our Sovereignty Goddess of the lands that hold our ancestral kinship, is an important step in the healing of the world.

The Celts were a collection of tribes with origins in central Europe that shared a similar language, religious beliefs, tradition and culture.

It’s believed that the Celtic culture started to evolve as early as 1200 B.C.E.

The Celts spread throughout Western Europe via migration —including Britain, Ireland, France and Spain— with proto-Celtic people arriving in Ireland and Britain around the time of the Hallstatt culture (or Atlantic bronze age) around 700-500BCE.

They occupied a territory through Europe from Ireland in the west, to the central plain of Turkey (Galatia) in the east, even as far as the sea of Azov (Black sea), and north from Scotland, south into Italy, as far as Ancona, also south to Cadiz on the Iberian peninsula.

By the 3rd Century BCE , the Celts had reached their greatest expansion. They were one of the great founding civilizations of Europe and the first Northern European civilization to emerge into recorded history.

Several tribes made up the larger population of the Celtic people. Indeed, the Gaels, Gauls, Britons, Irish and Galatians were all Celtic tribes, but all existed out of smaller tribal groups. Historical evidence is of tribes being led by kings, or sometimes queens.

The map, from a mural in Glastonbury by Yuri Leitch, shows the approximate location of the major tribes who lived in Britain at the time of the Roman Conquest of Britain in the First Century AD. The main source for the existence and location of these tribes are Roman writers who visited Britain. 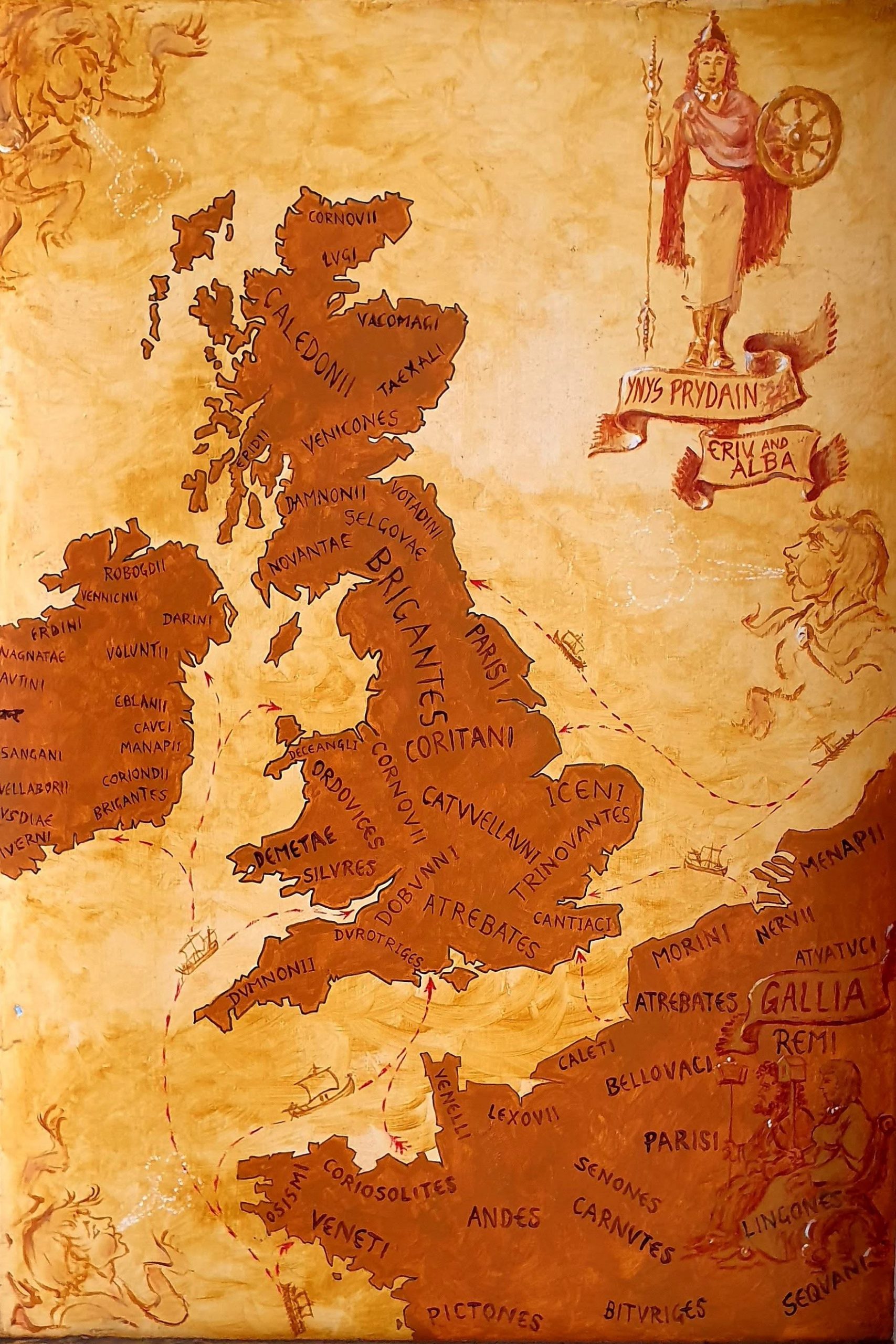 It is currently thought that various central and western Celtic European societies, had individually different customary laws, which evolved out of similar social needs, but influenced each other considerably over several centuries or even millennia, and thus ended up reasonably similar to each other. Celtic law can only be reconstructed as a generalisation.

A common denominator was the importance that ancestry had, as is stressed by several classical authors. Kinship, a complex concept of belonging, without a doubt played a very important role in all Celtic societies, extended to ancestral land or places of sacred significance.

There is relatively strong evidence for a customary requirement for kin members to support and help each other, in everyday life as much as in legal disputes. One of the most important legal principles that seem to have been associated with kinship, is that of private property, especially the ownership of land and resources. The other highly significant legal aspect associated with kinship relations is of sexual unions and reproduction.

Though it can’t be determined with certainty from the available sources, the Celts were an equalitarian society, at least by the standards of their contemporary cultures and time. Women and men were able to have, hold and inherit property and wealth, and had separate property even when married. They were both able to divorce permanently or on a temporary basis, and could be leaders, teachers, scholars, artisans, druids and warriors.

In Ireland, Scotland and parts of England, the Celts mixed with pagan tribal inhabitants, in some places called the Pics, who were descendants from Proto-Indo-Central European LBK (linearbandkeramik) people.

These people, who practiced matrilocal social structuring and matrilineal descent, had quite distinct characteristics, but we know that they met at specific times, in specific places. Stonehenge and the Avebury circles are monuments to these star-constellation determent gatherings of exchange and celebration of that which united these people, including their Deities.

For the Celts of these isles, a mix of matrilineal and patrilineal arose, that resulted in kinship, sovereignty and kingship following the female line, but had sons and daughters being named for their paternal lineage.

Rooted in the ancient spiritual reality that saw the Earth as sacred and the Land as specific Goddess of place, who was sovereign, a Queen Goddess, tribes belonged to the Deity of their lands in a form of kinship.

This Goddess often had the attributes of the warrior, mother, or fertility Goddess, and it was She who bestowed sovereignty, a role that was embodied by the queen or priestess, in the sacred marriage that legitimised kingship. There was therefore a relation between the king and Deity, an intimacy between the one who had kinship with the Goddess and with the land. The king was wedded in a sacred marriage to the Goddess that ensured the fertility of the land.

Neither the Romans nor the Anglo-Saxons, who took what is now England from

the Romans in the fifth century EC, were able to successfully invade Ireland. This enabled the Celtic tribes that had settled there (namely the Gaels and the Irish) to survive, and allowed their culture to flourish for longer then elsewhere.

Their legacy remains most prominent in Ireland, as well as in some parts of Scotland and Wales, where traces of their language and culture are still found today.

Their tribal mindset however, is something we have lost. Christian patriarchy has been brutal at erasing the reverence for belonging to the land and of serving Goddess. It has rewarded and celebrated ‘having dominion over’, and glorified ‘taking and using’ for self-serving purposes, to the detriment of kinship and without any sense of the need for reciprocity.

The loss of our tribal mindset grounded in Goddess is a root cause for the creation of great suffering, ongoing hideous hardship, and the injustice of ‘other as lesser’ making. Our European disconnect from the sacred belonging to Goddess and to the land in kinship with all beings, is a disease we, as white European people have spread to all continents and imposed on all cultures we’ve met.

Not only have the ‘conquered European people’ imposed and perpetrated the same destructive wounding on all other tribal people, we have colonized, dominated, ruined, colonialized, killed and disempower, without any connection to sacred kinship that requires a giving back, a returning to, as part of being part of the land and family of life. We have created a spiritual poverty based in lack and disconnect that seeks our attention, our becoming conscious of, through our distorted behaviours. It is this wounding of not belonging, of disconnection, that is also the root of the worldwide environmental crisis we have created and now must face, as the direct result of our war with Mother Nature, our loss of reverence for the Great Goddess whom we are all a part of.

To return to a tribal mindset of responsibility for nature and each other, to the kinship with all of life, will require a remembering of the sentient sacred of the Earth and elements. With reverence to the sovereignty of the Goddess of place, with genuine remorse for damage done by our ancestors and generation, we may begin to do what it takes to restore and mend some of those wrongs inflicted, some of those wounds caused.

It is not too late to return to this part of the pagan ways of our Celtic ancestors and start to relearn how to be brothers and sisters. May we find our way back to walking in awe of the splendor of our place within the great interconnected circle of all life. It is time to return to the sovereign Goddess of place, and to let go of the ways of domination over, and exploitation of.

It is time to step up into our responsibility, and be guided by the Tribal Star Goddess, so we may remember to humbly step into belonging to the land as Queen once more.