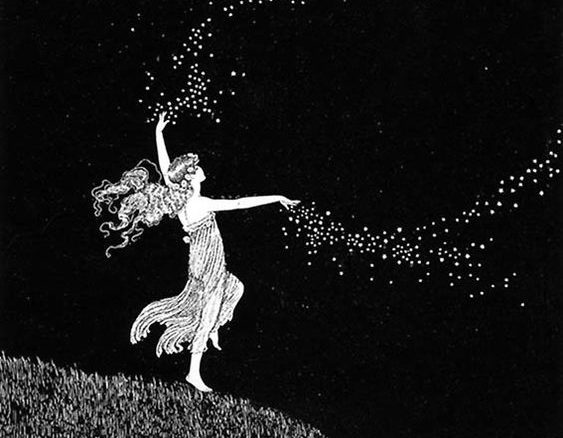 During these times of lockdowns and restrictions, when, aside from the fear and uncertainty, just filling our time with something varied and fulfilling can be seen as an astronomical task, how many of us have turned to creativity? I know that I have. I don’t just mean my own creativity and the art that I enjoy making but also the creativity of others. Music and stories and poetry, things that fill us up and take us out of ourselves when we need them to.

Creativity comes in so many forms and over the last year, despite the fear, injustice and disease, we have been given an unprecedented chance to expand and practice, to push our creative ideals and limits in new and unexpected ways. Be it making bread, or picking up an instrument, or painting, creativity expresses itself through our hands and our hearts.

The things that we do and make are the fruits of our inspiration. The star queen Brigantia reminds us of this fact, She sets star fire burning inside of us. She is the cosmic play of courage and creativity, of questions and, instead of answers, art. Through Her we can hear the stars singing and translate that song into our own creations.

But the act of creating is only one part of creativity. The other part is the less obvious part, the part that is not so attractive or dynamic, but is no less part of Brigantia’s star gifts to us: It is the boredom. It is the silence and the space to listen to the star song of creativity. This space or boredom is the melting pot of creativity where ideas are formed and where talent is ignited.

This year, challenging though it has been, has also given us that space, though we may not realise it or have noticed it. The star song has been playing through our night dreams and our day dreams and in the rushing quiet of a year forced into standstill, of the pause just before spring, in floods this star song of Brigantia. We may not notice it at first but it takes root in our hearts, this message from the star Goddesses, this song from source, and eventually it erupts in creative expression if we give it the space and time. We can see and hear that star song in the art of those who are not us; in the songs that touch some deep place, or the paintings that take our breath away. We see it in a well-crafted story, be it written in a book, told around a campfire, or binge watched on Netflix, that puts us into someone else’s shoes even if just for a moment.

In these times when uncertainty and fear scream around us like hungry monsters and boredom squats above us like a dragon ready to devour us, perhaps we can look to the wisdom of Brigantia. We can turn to the dragon and embrace it. We can learn from this dragon of boredom the star songs of creativity that might not only offer us release and fill us up, but also could help others through these and future times. 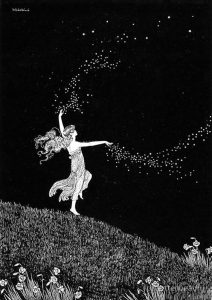