Brighid, Brighde, Brigid, Bridget, Brig, Bride, Brigantia, Bridey…
She is known by so many names, shapes and forms. These names (and many more) are only the names that She has been given over the centuries as Goddess, She has many more as saint as well, depending on where She is revered.

I have been journeying with Brighde-Brigantia (as I known and name Her), for almost 20 years now and the more I explore Her stories, myths and legends, and the more I connect with Her in my life, the more I am convinced She was and is The great Celtic Goddess. Her name translates as ‘High One’, ‘Shining One’ or ‘Exalted One’, indicating that before ‘Brig’ became a name, it was a word capturing the energy as Goddess. Maybe that is also why Her name is found in so many places, linked with sacred wells and springs, placenames and even whole regions, not only on the British Isles, but over the whole of Europe, everywhere where the Celtic people settled for longer or shorter times.

The stories of Brighid linked with Avalon are that of a Goddess and a Saint. The legend that tells of Saint Brighid having visited Glastonbury in human form, for me has the ring to it that there is an older reference to Her as Goddess presence on the Isle of Avalon. And there is definitely a tangible energy of Brighid on this sacred Isle, not just as Saint, but also as Goddess. I believe it very likely that the legendary ancient priestesses who lived and served on the Isle of Avalon were devoted to the Great Celtic Goddess (Brighde-Brigantia) as well as other, more local, Goddesses.

In my modern-day-priestess work, I like to connect with those ancient times on the Isle of Avalon. In meditations at Bushy Combe, I often have been taken into ‘the valley of the priestesses’ and encountered women of all ages learning the craft of healing, herbalism, prayer, potion making, midwifery, all crafts related to Brighid as Goddess of Healing. They also seemed to be Fire-Keepers for not just the normal day to day fires, but also the eternal fire of Brighid, the life-giving energy that comes from nature and is reflected in all that is alive. And on Bride’s Mound/Hill you can connect with a later but maybe as devotional energy of women and men to Her from early Celtic-Christian times, who served Her on the threshold of those changing times. In those visualised encounters, there is no doubt that Brighde-Brigantia is a if not the Sovereign Goddess of Avalon and this is how I have always seen Her as well.

And I am not the only one. In his book ‘The Pagan Temple of Glastonbury Tor’, author Yuri Leith considers Brighid-Brigantia as his first choice to be the deity of the Tor. For that he refers to the fact that She is the most high and exalted Celtic Goddess and that names of the landscape could be named after Her, like the river Brue, which was called Bry in ancient times. He even brings forward that the name Glastonbury might have come from ‘Glass-Town (on the) Bree’, with the old Brythonic name of Glastonbury being the Isle of Glass, Ynys Witrin.

Another source is the channelled writing of Kathy Jones, who points out the Swan form of the Isle of Avalon, with Weary All Hill being Her neck, Chalice Hill Her body, and the Tor and Windmill Hill Her wings. In this context the Swan Maiden (who becomes the Isle of Avalon) is considered the daughter of the great Goddess Brigid (Sovereign of the whole of the British Isles), and later in the myth becomes the mother of Bridie, in the form of Bride’s Mound/Hill. This clearly shows that the Goddess – Swan Maiden – of Avalon is holding the lineage of Brighde-Brigantia, or more precisely: is Her. 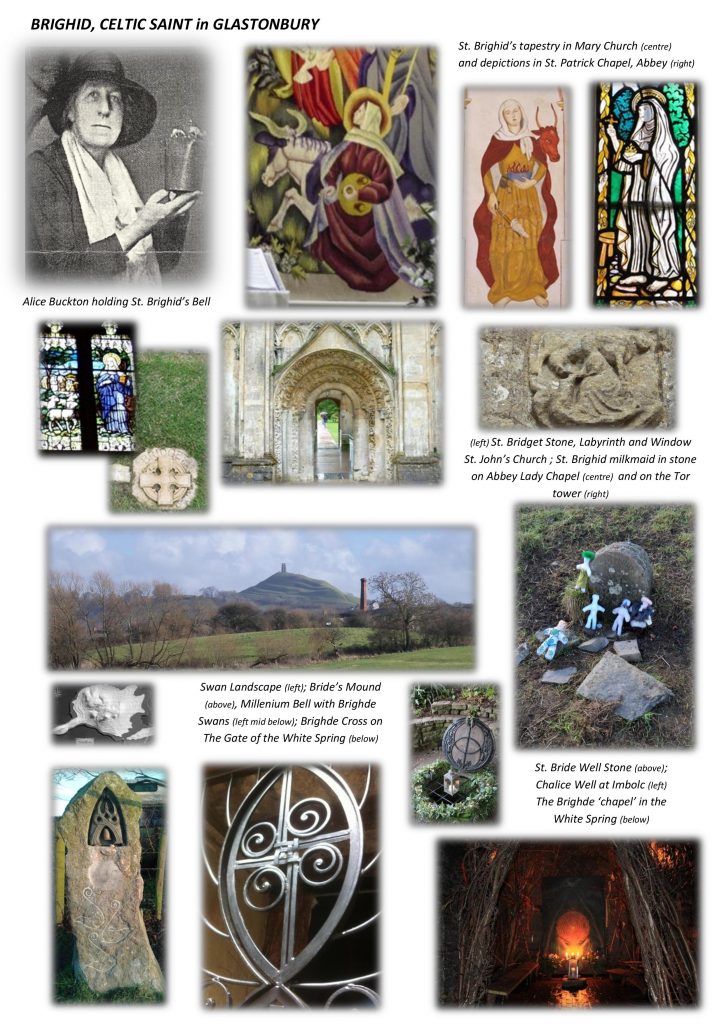 If you would like to have physical proof of the relationship of Glastonbury-Avalon with Brighde-Brigantia, I will have to disappoint you, there is none; unless you count the picture of Her bell, held by Alice Buckton. Even the stories (of which there are many, even including a possible encounter with King Arthur), that She as Saint visited the Isle, are more to be found in the realm of legend, than fact. But nonetheless, She has been given shape in many ways and forms to commemorate Her presence in Glastonbury-Avalon.

You can find imagery of Her carved in stone on the St. Michaels Tower on the Tor and at the Lady’s chapel Glastonbury Abbey, both as milkmaid. You can also find Her in the Abbey in stained-glass and painted, with cow, bell, fire and spindle, because it is said that when She left Glastonbury, She left those items behind and that the bell was still around in the 1950ies (hence the picture with Alice Buckton) but has been lost since. In the St. John’s church, She is depicted in Her blue cloak in a stained-glass window and as a corner stone of the labyrinth in the churchyard. And in the ‘Our Lady of Glastonbury’ church She is the only female saint in the tapestry. Her Brighde Cross is part of the White Spring gates and there is a special shrine dedicated to Her, since Imbolc this year with a beautiful new statue by Phillipa Bowers! Maybe all of those are physical proof of Her presence after all?

Since I moved to Glastonbury from The Netherlands, Brighde-Brigantia has been my guiding star. She has inspired me, challenged me, comforted me, picked me up more times than I can count. For instance, when I was desperately looking for a place to live, I prayed to Brighde, who is also the Goddess of home, hearth and hospitality, and was offered a home in St. Bride’s close (!) in town.

She has brought many students to Glastonbury who seek and find Her here on the Isle of Avalon and beyond. We are Her Priestesses and Priests returned, Keepers of Her sacred Fire, connecting in from all over the world to this heart chakra. We hold Her Eternal Flame, from sunrise to sunset to sunrise, within and without, shining Her light, healing and loving energy back into the world.

I am so grateful for all She has taught and brought me, and She has taught me so much, but most of all how to be authentically and truly sovereign of myself, how to walk my talk and how to be a servant leader (as I feel She was and is)!

Know that you can always call on Her, feel Her presence within and all around you, in all of nature. You can especially rely on Her when you find yourself lost or in the dark. Brighid is after all the Shining One and She sheds Her light on anything. Working with Her is truly how we say it at Imbolc in The White Spring each year: ‘Her light shines in the darkness, and the darkness shall not overcome it’. I cannot wait to hold Her radiant energy as ‘Sovereign Goddess of Avalon’ this year!

I am curious to hear how you experience Brighde-Brigantia’s presence in Glastonbury-Avalon! 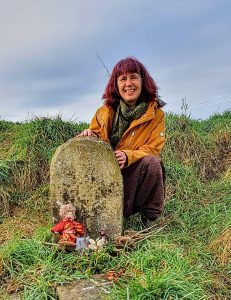 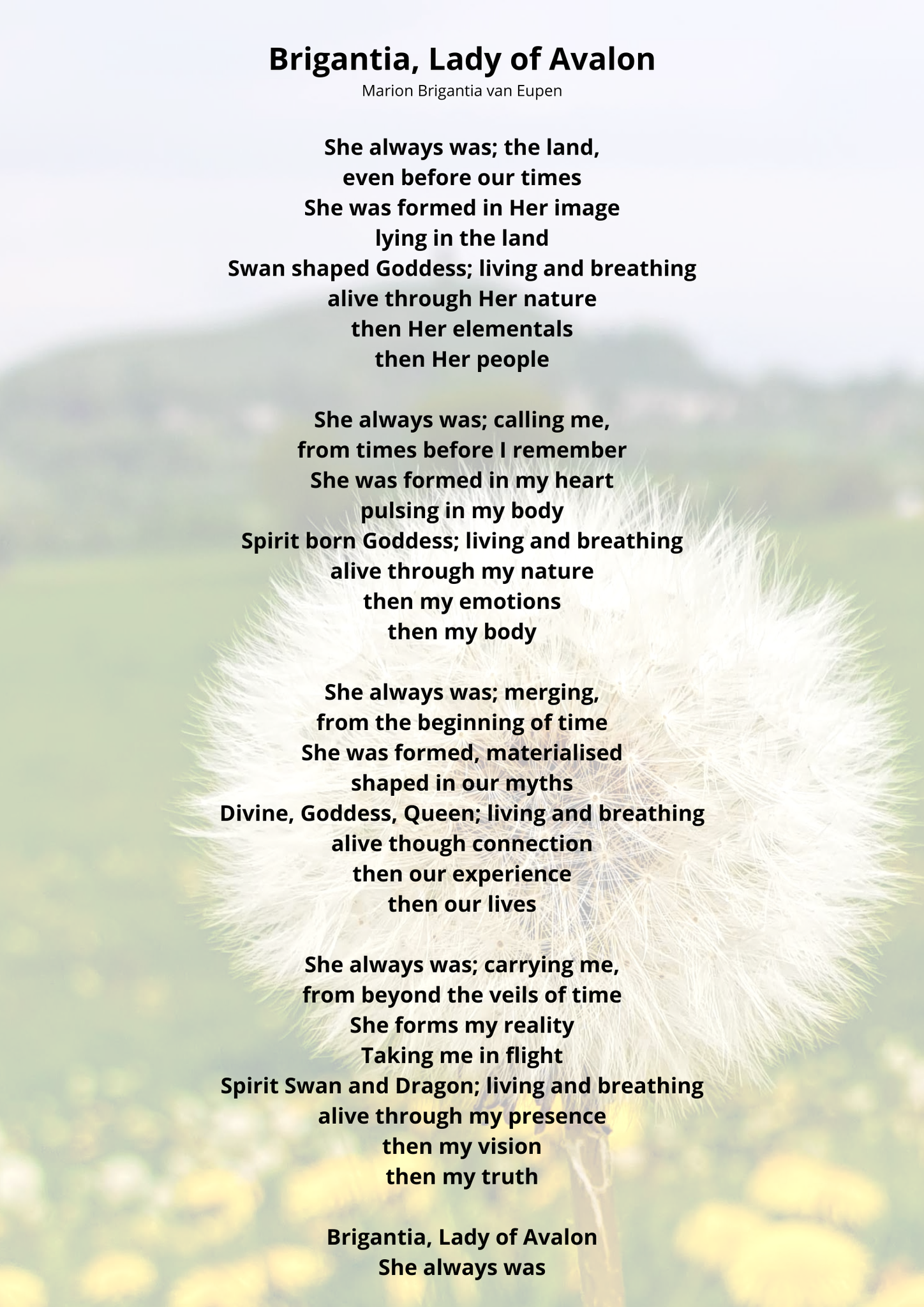