Welcome to the Glastonbury Goddess Conference

In 2023, we will honour, celebrate and welcome the Crone Goddess in the 28th Goddess Conference in Glastonbury UK. This is the last part of what has become a six year cycle of Goddess archetypes we started in 2018, and in 2023 we will connect deeply to Her as Lady of the Otherworld.

For the 2023 in person Goddess Conference in Glastonbury, we will once again raise the great magical Temple of the Goddess. Here, where we may see and know Her in some of Her forms, we can offer Her our love, our grief, our longing, our joy, our beauty, our pain, our stillness, our many gifts and our hearts desires. We will take the threads of the directions that weave our way back to Her, and together enter the portal of Her Otherworld presence.

Come and join us on this journey, Come make pilgrimage to the Otherworld of Avalon and answer the call of the Crone Goddess.

For many are Her names and forms, and all of them are ancient.

Browse the presenters page in the menu, stay up to date on the line-up and learn more about their contributions. 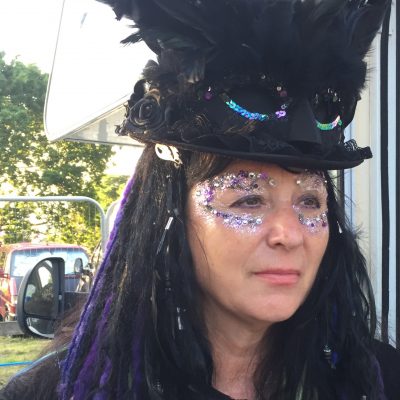 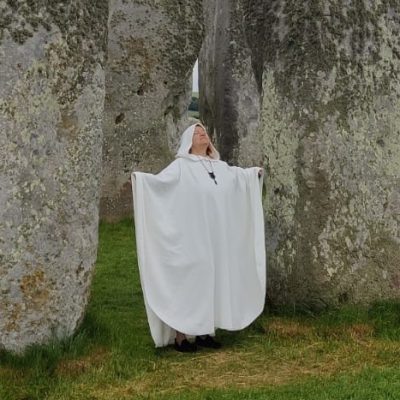 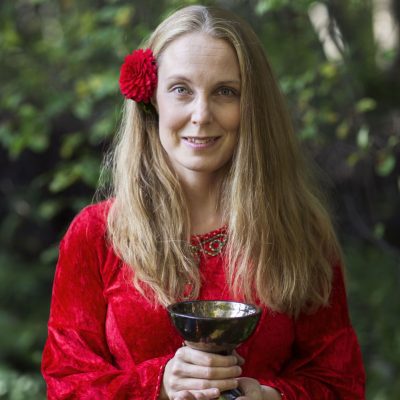 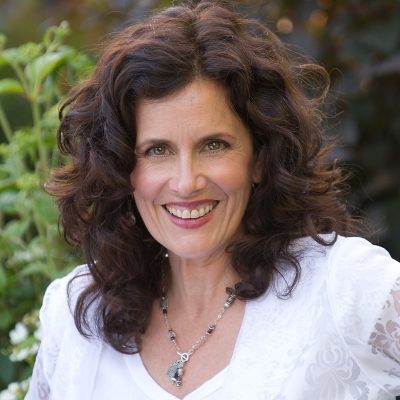 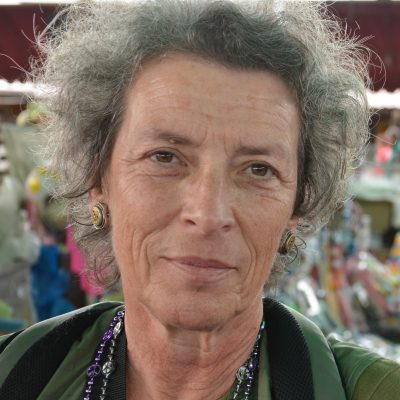 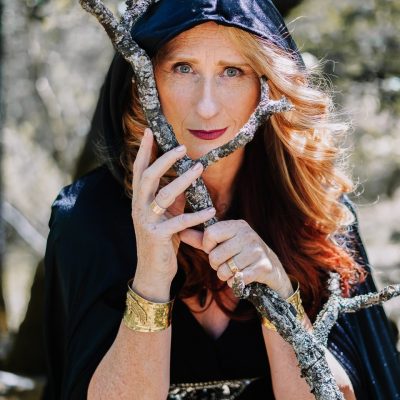 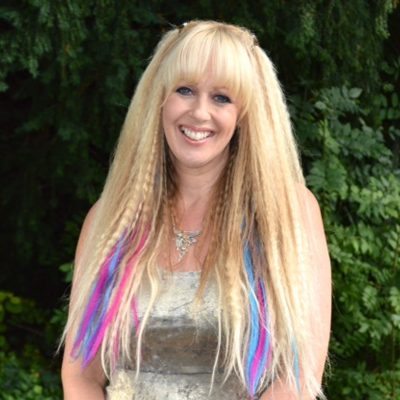 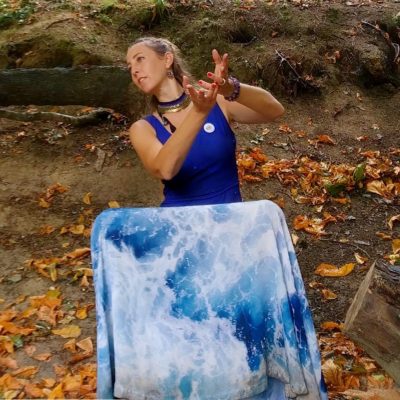 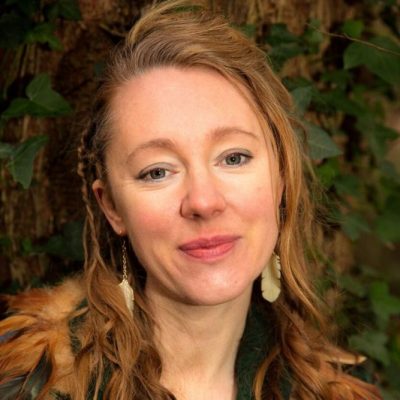 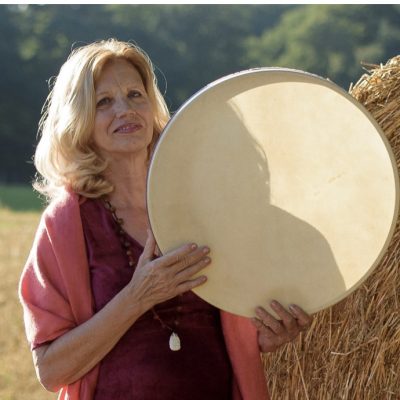 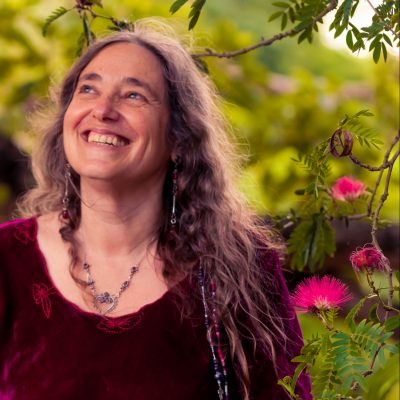 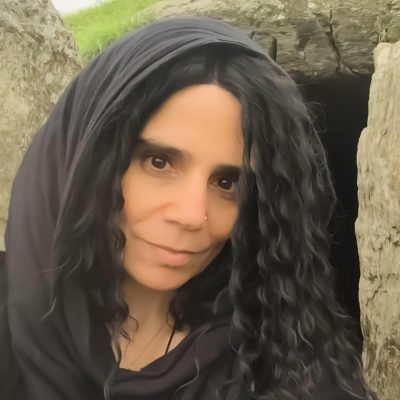 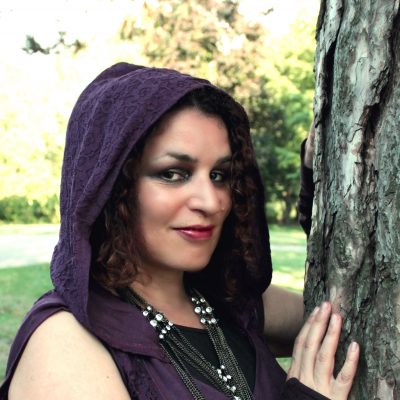 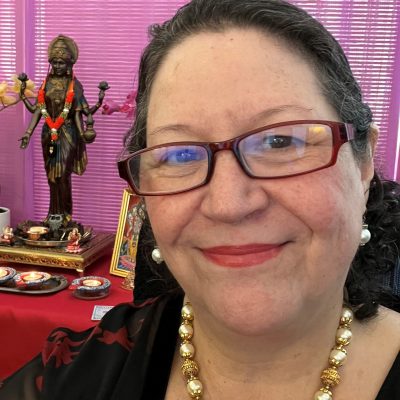 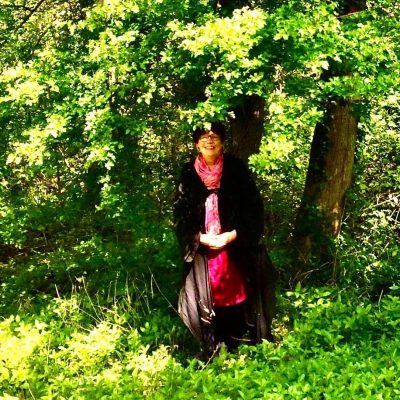 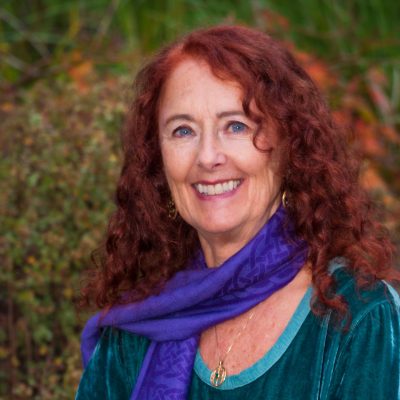 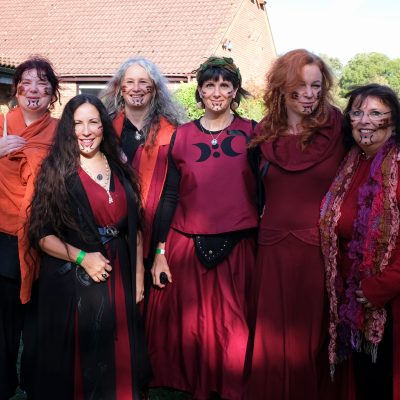 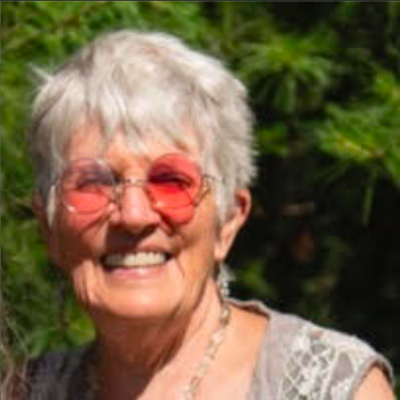 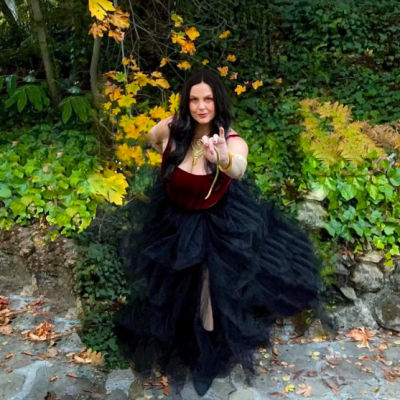 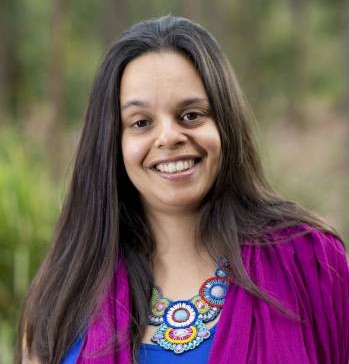 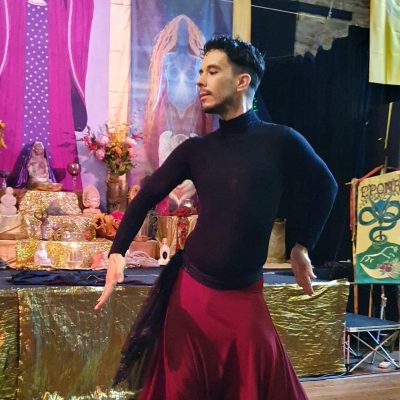 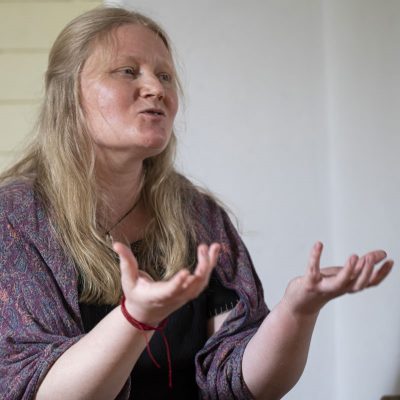 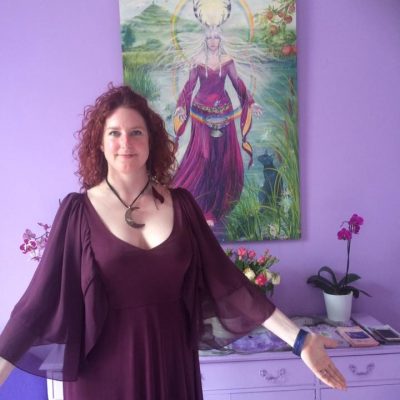 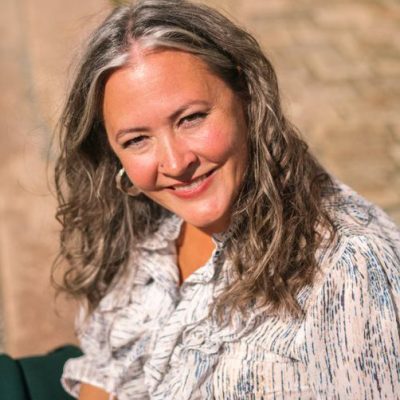 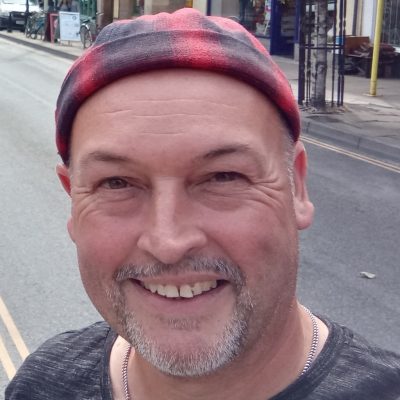 The Crone Goddess, perhaps the oldest and most revered of all Female forms of the Divine, is the primordial Ancient Mother of Earth, of all of Life, of Death and of the mysteries of Transformation.

As Crone-Bone Goddess, She might appear as frightening, but is the treasure-gateway of rebirth and empowerment if we are open to listen for-, and follow Her guidance. As Hag-Crone, She defies convention and surpasses limitations.

Her magic runs so deep, it sleeps in marrow and magma, yet rises in every breath, in every act of kindness, co-operation and compassion, to fly and touch the constellations, and whisper wisdom on the wind.

There are so many forms of the Crone Goddess in the world. She is loved by people in many different ways, in all lands and places, and we want to acknowledge that in the 2023 Goddess Conference. 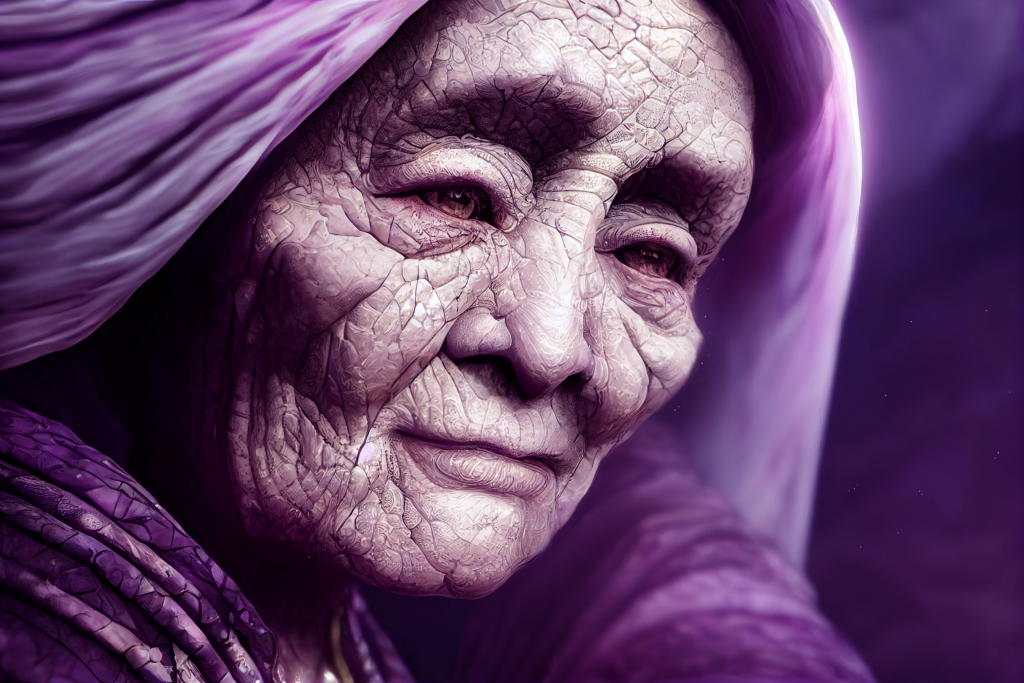 She is the Reaper, the storekeeper of memory,  the Great Comforter: Light in the dark.

She is Mistress of the mystery of death and rebirth, Mother of Scars and of Healing Hands.

She offers wise council, She laughs at confusion, She pierces illusion, She gathers the broken and nurtures authenticity.

She teaches by giving us fiercely challenging initiations and softest safe places of belonging.

Her cauldron of transformation brews the medicine of Love for us all.

Shape-shifting, She is Ancient One who sparkles with iridescent mirth and dances wildly, telling roaringly rude jokes.

She is Spirit Bird Woman of many different feathers, Fairy-Good-Mother who grants us our wishes, and Dark Mistress of the Night.

On our 2023 Goddess Conference wheel, the Crone is the Ancient One, the Grandmother, the ‘Wisdom beyond our years’ that resides within us all. Old silver head, She who opens Herself to let us pass through into the Otherworld where She will gently guide us to that which we need to find, retrieve, claim, release or see.

Our Lady of the Otherworld is a Wise Medicine Woman, many eons old, yet ageless. Goddess of the Wheel of time, Sister of the Circles of Nine, Goddess of the witches, Dark Mother, Stone and Bone Woman. Do not mistake Her as feeble. For She is powerful and unavoidable! She will appear to us at specific times, usually to test or guide, and always to initiate us into Her wisdom ways. The Crone Goddess comes to us to ask us for that which is ready to die within us, ready to be let go of in our life, ready to be changed. And ready or not, She will take what is Hers.

We find the echo of Her presence in so many of our European fairy tales, in which the Goddess mythologies and initiation wisdom of earlier times were hidden and preserved. For our Goddess Conference in 2023, She is in the wild wise ancient places that call our soul and make us step up and forward into the unknown to meet Her. She offers us the portal through which we may enter Her mysteries, Her realm of the Otherworld.

Do you know Her names?

We will ask all participants to bring the name of a beloved Crone Goddess, so that we may include it in a special process, to honour as many forms of Her as possible together, during our opening ceremony.

For many are Her names and forms, and all of them are ancient.

How does She manifest in your life? In your dreams and in your devotion, in your body and in the cycles of the moon?

How does She speak to you in the sacred landscape and through the seasons of the year and of your life?

Does She bring you Her spirit birds to ease your heart and sing the songs of Her Otherworld? Is She smiling at you from the faces of the Elders or way-showers in your community?

How do you connect with the Goddess in Her Crone aspect?

The Otherworld, which may include the Underworld and the world of the dead, but which is also the magical realm of Avalon; a different reality existing through the mist of time, where Goddess ways are remembered, and Goddess focussed lives are lived, and of Anwynn: a world of delights and eternal youth.

Our ancestors found their way to Her realm through different gateways, often in magical natural settings, as part of a hero’s initiation journey, or sometimes quite by accident. They reached the magical Otherworld by entering ancient burial mounds or caves, by stepping into fairy rings or sacred groves, by journeying through a mist, by going under water, or by traveling across the sea for three days on an enchanted boat or on a magical horse. The stories of these visits to the Otherworld were referred to as echtrai (adventures) and baili (visions, ecstasies).

If you enter the Otherworld of the Crone Goddess unaware, you may find you have to stay for a year and a day, or sometimes for a hundred years, or you may find on your return no time has passed at all in this world, during all of your wanderings there.

And so, in Avalon, where some of these portals into the Otherworld of the Crone Goddess can be found, the priestesses of the Lady of the Otherworld hold the symbolic and ceremonial keys to enable safe passage and to protect Her wisdom ways.

The colours for the 2023 Goddess Conference, with which we will celebrate the Crone Goddess as Lady of the Otherworld are: darkest purple, black and iridescent.

For iridescent; think dragonfly wing and starling feather, mother of pearl and the sheen on spiderwebs, pearl shimmer and starlight sparking on frost. Think crystal prism rainbow light, that is colourful, filled with magic and life: something that is there but at the same time is ungraspable: iridescent is the otherworldly colour of the Crone.

Get your ticket & more

Explore the Goddess Myth Books, the storyline of the Conference as a multi-coloured cloth The ceremonial Priest/esses explore the energy and the stories of the Goddess as She is celebrated in that specific year. Order them now for you personal collection! 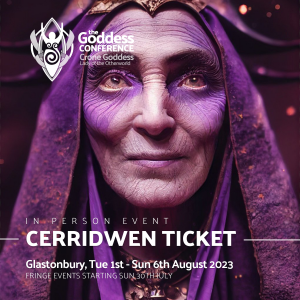 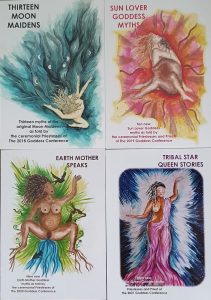 For She is powerful and unavoidable!

Magical pictures of previous Goddess Conferences. The memories warm our hearts and make us excited for what is to come!

Courtesy of the wonderful Ann Cook©, Conference photographer of the last 20+ years. Thank you for the amazing photos.